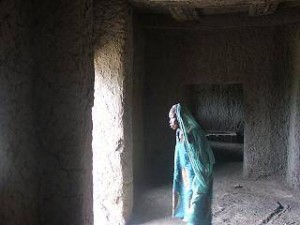 Rabih’s Fort is widely acclaimed to have been built during the time of Idris Alooma in the 16th century and was used by the Dikwamawa who ruled over the area as a Palace. But shortly after Rabih Fadl Allah, a brave military adventurer and a notorious slave merchant from Sudan in the mid 19th century successfully defeated the Borno Army three consecutive times, bringing the El-Kanemi dynasty temporary to its knees, he then settled down in Dikwa in 1893 sending the Dikwama Adam, the then ruler of Dikwa to Gajibo, a settlement for religious leaders, 7 miles away from Dikwa, as Sunday Trust gathered.

At that stage, Dikwa’s already strategic and fertile wetlands became the capital of Rabih’s Empire, which stretched “to the walls of Kano to as far as Chad, Cameroon and Niger,” said Mohammed Adam a historian, cum writer and the President of Borno Museum Society. The Fort was said to have been rehabilitated by Rabih with stronger, higher and broader walls in order to accommodate his numerous women, horses, slaves and body guards. Indeed, Rabih’s Fort was likened by many, as the Oval office of that medieval time, where coup d’etat against Leaders and Empires were planed and executed in the Palace.

One of the expatriates who toke measurements of Rabih’s ruined Palace in the mid 20th century said, the walls measured six feet, and the Palace was divided into three sections, comprising of the frontage where the guards stayed, the main quarters of Rabih and his numerous women. The building materials of the Palace include sun-dried bricks and woods imported from the Gongola valley. Although building experts were said to have been brought from Sudan, while, the local population was said to have provided the necessary labor force, as related in Adam’s book.

But the disregard for cultural heritage in modern society led to a total collapse of the Palace before the mid 20th century, as stated in many accounts on the Fort, and efforts were made to restore it in the late 80’s. But people like Adam, a former top official in the state, grew up to become the guardian and one of the most prominent connoisseur of Rabih’s Fort, but later became disillusioned when he could no longer contain the increasing demands of maintaining the heritage. Two decades later, after the last restoration work, the Fort is at the edge of another precipice because, “nobody cares about it any longer, and this year’s raining season is endangering the place”, these are the words of Yakura and her husband Zantalma Saleh, the two Custodians of the Fort for many years now.

The roof of the Palace is leaking, making the interior floors of the Palace muddy. The stair case leading to the living room of the then Sultan, bears another friengthening fragility of this royal patrimony, and the only traces of where Rabih kept his birds, believed to be his most priced emissaries, can only be appreciated in books today. His once enviable royal bathtub remains full with muddy water from the leaking roof “we grew tired of emptying it because we realized it was washing out the clay used for making it” said Zantalma. Also, the Palace walls can hardly stand the intimidating heavy down pour that sometimes snakes through the Palace threatening its very foundation. This was the state of the Fort during a recent reporting trip by this Correspondent.

One thought revealed that, if Rabih will be alive today he would have mobilized a retinue of horsemen to the National Commission for Museum and Monument in Abuja, to provide resources, while he will order the National Curator to immediately restore the palace that once stirred the influence of his socio-political colossus that exist till date. “They [NCMM] don’t seem to care and even the state and local governments have turn down many of our proposals to restore the place”, said Adam who remains bitter at the current state of the Fort.
According to Chris Ntaku, an anthropologist and a lecturer of Museum studies with the University of Maiduguri said, Rabih’s Fort is a patrimony not only of Nigeria alone but of West Africa but Africa as a whole, where the impact of his rule was felt when he was trying to built a state of his own, Chris implied. “Rabih’s Fort is in ruins now, it needs an immediate restoration, if you have seen the place in 1987 to 89, it was renovated around that period but since that time no work has been done on it again and you know its a building made of clay which needs to be restored every 2 to 3 years” said Chris.

“We in the Borno Museum Society in which I am the President, we have been struggling all these years to see that Rabih’s Fort is put back to shape, it is the only monument in Borno, taken over by the Federal Government as a national monument, they have gotten members of staff on ground but the question of just providing little funds to maintain the Palace is what is killing the place. We on our part have been able to establish a museum within the colonial building to entertain visitors but as far as the building is concern, we as a small association cannot maintain it” said the President.

At the Museum, which was established by the BMS within the Colonial building, there are rich assortments of materials like swords, spears, protective metal jackets and pictures, which speak eloquently of Rabih’s aspirations to build a state as far as his horse can go no matter how long it took.
There is no way one can write the history of Borno, without Rabih and his Fort, which is one of the few practical example of our history, “but I am afraid the politicians seems to pay little attention to our culture and we should also know that the way we are embracing the so-called globalization affects our culture, also our own concept of modernization is completely upside down in the sense that we embrace things in the wrong way, we seem to be abandoning our culture in the name of acquiring new things” said Chris who also contended that, the way and manner our reading culture has completely gone down, people don’t read books, people don’t use the libraries, “so I wonder what would happen if the practical examples of our history no longer exist”.
According to Adam, to be very fair to the good people of the state, it is not only Rabih’s Fort that is at risk in the state, there are so many historical places “like the Kukawa palace where we have the graves of the four Shehus of Kukawa, Shehu Laminu, Shehu Umar, Shehu Bukar and Shehu Ibrahim, the graves are there in the old palace but apart from that building which contained the graves and the parameter walls, there is nothing there. Go to Ngala you got where Shehu Laminu stayed and prayed, they called it El-kanemi prayer room. Go to Biu where there is another practical historical sight of the Yamtar’ Walla, “but all these are in poor shapes” said Adam.
“I am sorry to say that here in Borno, the government at the local and state level, the elders and the traditional leaders are not interested in preserving our history”. According to Adam if he is in leadership position, though an old man now, “I will rebuild the Kukawa palace so that whenever the Shehu goes, he will reside in his grand parents’ house. I will also rebuild the palace of Dikwa and when the Shehu goes there he will say; this is where my grandparents use to rule”.
During the week long research on Rabi, Sunday Trust learnt of a unique account that, during Rabih’s Reign between 1893 to 1900, particularly later years before his demise, the current Shehu of Borno’s father Late Sanda kyarimi, said to be a brave heart, even as a teen then, dared Rabih and threw stones at him on his to the mosque, everyone became stunned, Rabih was to act with the virulence that was typical of him. But when he was told that his young and brave attacker was the son of late Shehu Kyari, Rabih then ignored him saying it was natural that he will retaliate, given the fact that his own father was slaughtered by Rabih, when the said Shehu defeated him but later conceded to Rabih again when the army of the Shehu slept off thinking the enemy’s threat was over, as related in many books.

Again Sunday Trust found out that Mala Gana Nyebbe the direct ground son of Rabih who lived and became a village head in Bama and later died in 1956 enjoyed the goodwill of the very authority that his grand father inflicted so much pains to. These two anecdotes, according to Adam, reflects the peacefully co-existence of the descendants of these two contending powers shortly after the El-kanemi dynasty was restored after Rabih seized it for 7 years.
“History whether good or bad must be maintained because, it has become a natural historical monument” said Adam who added that, “Elkanemi came not because we invited him, the British came not because we invited them, the Hausas never invited Uthman Dan Fodio. So governments emerged either from within or outside. Rabih was one of the leaders, not only of Borno, but of Africa as a whole.”
Chris corroborated Adam’s argument that, the so-called insinuations that Rabih’s fort is left to die because of the severity he inflicted to the Borno people is completely wrong, because, “in Kukawa, Ngazargamu, Biu and the famous gates ‘kofa biyu etc’ of Maiduguri are all in ruins today, which would have been maintain as well” said Chris.

Rabih was said to be a heavily built man and very tall, whenever he strode from his room, the only building on the top floor of his house, to the balcony, either to watch happenings in his large compound or to dispense quick justice. According to Adam, he was so just that “when a woman reported one of his men that seized and drank her milk, Rabih threatened to kill her if after tearing apart the man’s stomach and find no milk, and he did just that with his sword, milk was there and the woman was rewarded, Adam implied
Today, if anybody of Rabih’s size and weight consistently stand on the balcony of the fort as Rabih did during his life time, apparently it will likely collapse, “ because the rain and other biological agents have weakened the structure” said Chris, and even the light and careful legs of this reporter made parts of the stair case leading to Rabih’s room to break way and according to Zantalma, almost on a daily basis visitors come from many parts of the country and Europe to visit the fort “students from War Colleges across the country and NIPSS in Jos are among our frequent guests” said Zantalma
Yet, according to many observers, with the kind of important visitors to the Fort, government cannot maintained the place “what we need is 2 to 3 million naira to put back the whole building, the masons are there on ground” said Adam.
Water vendors have also found comfort in the fort “they take advantage of the security here and there is also a borehole opposite the fort that is why they keep their things here” said Zantalma. Trespassers, from the ones on foot and the ones on auto mobile and cars pass through the palace and also, animals have made the place a resting and breeding ground.
Whether Rabih’s Fort and other historical sights in the state will be left to collapse completely remains to be seen. For a few optimists, Borno may one day follow the foot steps of Kano that are now restoring their heritage with the aid of the Germans but for many pessimists, Rabih may have to re-incarnate to rehabilitate his palace by himself as he did in 1893 when he settled in Dikwa